Join the fight against non-compliant products! Take the online training and add your voice to this campaign!.

While very few electrical professionals would deliberately supply or install sub-standard electrical systems, anyone could inadvertently do it when they handle counterfeit electrical accessories.

All electrical professionals should be conscious of the law of ‘subrogation’, which enables insurance companies to recoup money they have paid out on insurance claims from other parties who can be identified as being partially or fully responsible for the cause of the claim. So if you knowingly or unknowingly supply, install or specify counterfeit electrical goods that are found to have contributed to an insurance claim (e.g. fire or electrocution) because of being sub-standard or unsafe, you could be held liable for personal damages and possibly face imprisonment.

When people think about counterfeit goods, what typically comes to mind are fake Rolex watches and Gucci handbags. Few people are aware of the proliferation of counterfeit electrical products.

We’re not immune to it in Australia, with thousands of non-compliant GPOs, lights, cables, RCDs, etc coming into our market every year through unscrupulous importers. In 2010, an Office of Fair Trading (OFT) campaign uncovered 311 non-compliant electrical products being sold by various retailers across Sydney, including lamps and lighting products. And in 2006, the OFT uncovered a large number of counterfeit HPM-branded GPOs in the marketplace. Not only were these fakes found to be of poor quality, they were also grossly unsafe, with the switch mechanisms breaking down with minimal use, rendering them dangerous to users over time. The OFT successfully charged the importer and issued warnings to consumers and the electrical industry on how to avoid being caught out by these counterfeit products. 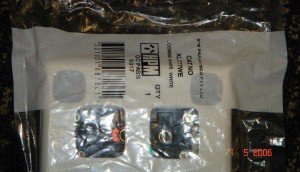 While such actions are admirable, their effectiveness is limited. Sadly a great number of counterfeit electrical goods still end up installed in homes and businesses around the country. The electrical industry itself – electrical wholesalers, retailers, contractors, electricians and consultants – needs to be particularly vigilant against them.

What can you do about counterfeits?

Look for tell-tale signs of counterfeit products – they can be clever copies of known-brand products, right down to moulded trademarks, logos and ‘production-clocks’; non-branded generic products with inferior componentry such as under-dimensioned conductors; and false certification marks supposedly from recognised testing laboratories to name a few.

Australia prohibits the sale of electrical goods unless the approval of an Australian electrical regulatory authority is first obtained under the Uniform Approvals Scheme. Manufacturers or importers must provide evidence that their products are safe, usually through test reports from independent testing laboratories showing that the appliances comply with the necessary Australian electrical safety standards. Approved products must be marked with the number shown on their Certificate of Approval. Overseas Certificates of Approval and approval marks are not acceptable in Australia and items bearing such marks, with no Australian approval markings, will be considered non-compliant.

Even the US Army has had to deal with counterfeit electrical products. A 2010 bulletin cited numerous problems from counterfeit electrical products found in its facilities, including counterfeit circuit-breakers containing nothing but a switch inside; breakers labelled ‘200A’ that were actually 70A-rated; reverse-polarity wired GPOs (shock hazard) with plastic casing that ignited immediately when tested (fire hazard); counterfeit breakers that tripped late or only when subjected to 200% rated current; and extension cords manufactured with undersized conductors, with insulation that melted under test and bearing counterfeit ‘UL’ marks.

Such problems pose serious risks to both the personnel working on the electrical installation and the general public.

Counterfeit electrical products are generally inferior to genuine products and have much higher failure rates. They are typically designed just to the materials’ limits, meaning that if put under load, they may overheat and possibly burn out. Genuine products, on the other hand, are specifically designed for purpose with applied research and knowledge developed prior to manufacture.

To prevent counterfeit electrical components being used in their construction projects, the US Army bulletin suggested that invoices be reviewed and materials inspected as they arrive on-site and prior to payment, checking for:

The bulletin encourages verifying product information through on-line safety testing laboratory directories (e.g. www.ul.com) as to whether products’ certifications are current. It also directs attention to the Anti-Counterfeit Products Initiative website (www.counterfeitscankill.com), which provides information on efforts to curb the proliferation of such products. Several safety testing laboratories and electrical equipment manufacturers also outline their efforts against counterfeiting on their websites.

In addition to these guidelines, there are also some common-sense actions that can be taken by all to mitigate the risks of being caught out by counterfeit electrical products, including:

With the emergence of LED lighting into mainstream lighting applications, it too has been the target of counterfeiters. And due to the ease of mass-manufacturing LEDs, many generic companies are producing low-cost, low-quality LED-based luminaires under premium brands. With many of the leading European and US LED suppliers establishing manufacturing plants in China, the ability to distinguish between genuine and counterfeit LEDs is becoming more difficult at the time of purchase. Sadly it is only when they are installed and the user experiences poor light-quality and short product life-spans, that the consumer realises they have been tricked by counterfeit lighting. Under such circumstances, it becomes even more important to employ the pre-purchase and pre-delivery checks outlined above.

Some of Voltimum’s founding members, including ABB and Legrand, are long-term champions against counterfeit goods, and active members of the British Electro-technical and Allied Manufacturers Association’s (BEAMA) Anti-Counterfeiting Working Group. This group proactively lobbies governments and trade groups around the world to combat counterfeit electrical products. One of its most significant initiatives is Electric Dragon, which operates in China to flush-out and smash Chinese counterfeit electrical manufacturing operations. The operation has dedicated investigators who regularly visit Chinese Trade Fairs to raid stands and gain intelligence. Working with local authorities, they have raided over 300 factories since 2000 and seized over 10 million products plus packaging and tooling.

The fight against counterfeit electrical products is a key objective of Voltimum and its members around the world. Make sure you regularly visit www.voltimum.com.au for technical updates on this and other important matters to our electrical industry.