Join the fight against non-compliant products! Take the online training and add your voice to this campaign!.

How to recognise compliant product

The new EESS has changed the marking requirements to a single Regulatory Compliance Mark (RCM). The authorisation to apply the RCM now lies with the responsible supplier. Upon registration, the responsible supplier is granted authorisation to place the RCM on product they sell. The certificate holder is no longer required to mark the unique approval number issued by the Regulator or the Recognised External Certification Scheme. NOTE: The Australian Communications and Media authority (ACMA) will also use the RCM as their required mark.

Transition arrangements have been included for marking changes introduced by the EESS. In general, from 1 March 2013 registered responsible suppliers have three years to change the marking on product they import or manufacture and sellers have five years to comply with the new marking requirements with product in stock and on the shelf. Refer also to the transitional arrangements on the ERAC website for more information.

The Regulatory Compliance Mark or RCM will be the symbol utilised to show the equipment is linked to a responsible supplier. 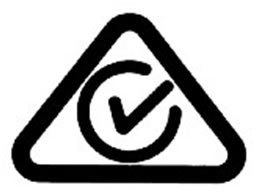 Previous marking requirements (prior to 1 March 2013)

Holders of Certificates of Approval under the old scheme were granted authorisation to mark the equipment with a unique approval number, or the RCM. These unique approval numbering systems are explained below, and are an indication the product has been through the certification process, equivalent to the requirements for level 3 in-scope electrical equipment

Typically, these markings consist of a letter to indicate the state or territory jurisdiction in which approval was granted, followed by several characters. With the introduction of the EESS, these markings will be phased out.

Examples of the marks issued under the old scheme legislation of the various regulators include:

The ERAC website (www.erac.gov.au) has a further explanation of recognition arrangements between jurisdictions.